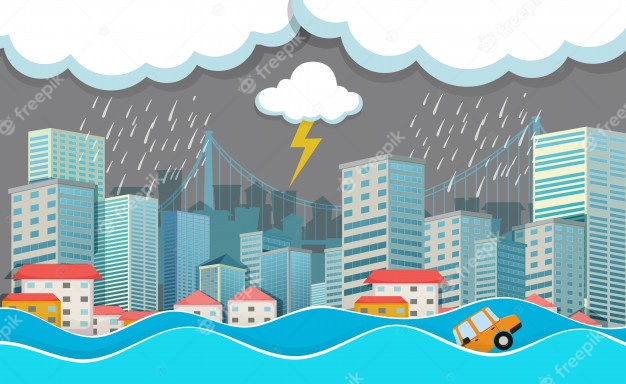 It’s raining cats and dogs! Well…if only it was. Cause cats and dogs would not have been as bad as the downpour of rain that has been hitting Germany, Luxemburg, Belgium and The Netherlands the past 2 days. The rivers are rising so fast, they burst out like a mentos from a Coca-Cola bottle. We have been warned of extreme weather. It has actually been dripping for years, and yet, while we felt the small drops on our heads, instead of worrying, we started humming: I’m siiiinging in the rain. Nice and cheerful.

Let’s see how cheerful our tune is now. Whole towns are being washed away. Cars are floating around like little ducklings in a pond and large groups of people have gone missing or even drowned. Hundreds and hundres of people have been evacuated. Meanwhile, it just keeps on raining. And raining. And raining, just a little more. In these areas, floods happen quite frequently due to extreme rainfall. However, the size of the rivers have broken record after record these past 2 days. Looking at the images, you get the feeling that the apocalypse is upon us.

I went for a walk today to have a look at this supposed apocalypse that I saw on the news. And to see if maybe, someone needed my help. Around 300 meters from my home, I ran into a street that was totally covered with water. The little creek that was running parallel to the street had flooded massively, covering the entire street, making it impossible for cars to pass. When I turned around and walked through the area, I found basements that were flooded where people decided to park their cars on higher grounds. I ran into a man that was hastily pumping water from his house. I asked him: “are you allright?” To which he replied: “Ha! Allright? Well, I guess you can’t really say I’m allright, but there is nothing you can do against it, eh? It’s the force of nature. It’s overwhelming. Nothing you can do”. The poor guy was pumping and running around. He said it all with a smile and a cheerful tone in his voice, however. I seriously doubted whether I would be able to produce a smile on my face if I was in his water-filled shoes. If I would be humming if I saw my new sneakers drift pass our rebranded coffee table. And it suddenly hit me: what do you mean, we can’t do anything against it? Is it really out of control?

So what did we do with these warnings? Barely anything. You can see it in the international media: “who is supposed to pay for the green transition? It’s expensive isn’t it? Why do we have to pay for the Chinese pollution? Our efforts are only minor, if the US, China and India aren’t doing anything, why should we? We can’t possibly change everything quickly. It takes time!”. So, everyone went into: after me, the deluge. The politicians thought so. The civilians thought so. And, especially, the grand masters of capital thought so. Well, ladies and gentlemen: here it is. That deluge. You would be surprised to see how quickly you can bring about a change in behavior, when you’re shoulder-deep into the cold water.

Of course, the green transition costs money. It will cost money for all of us. And yes, even if we do this in Europe, it will not mean much if the Chinese choose to be deaf. A better future, starts with the man in the mirror. You could choose NOT to pay, of course. But my advise to you then would be to use all that money you are saving to barricade the doors.

Adjustments to battle climate change are not costs. It is not even an investment. It is a necessity. Just like food. Or water. And even IF we join in the rhetoric of calling the adjustments costs; which costs do you think are bigger. The percentages you put on taxes and profit, or the ones you make when your whole company washes into the sea, along with your entire labor force.

But oh well. You can just see all of us still humming. We might even start singing a little, while looking at ourselves in the mirror. Vainely. Narcissistically. Knowing that we know it all too well ourselves. Let’s look at yourselves, dear people. Go ahead and look for those excuses not to pay the money for the transition. Look at that face in the mirror and let’s start humming or singing again; I’m singing in the rain. Just singing in the rain. Who gives a crap about the future, as long as I am happy again.